Cloning Windows 11 and Getting it to Boot

Oddly, this article is focused on the latter part of the title.

There are a myriad of different ways to clone Windows to another HDD / SSD, etc. Software (Acronis, Linux based, etc.) and Hardware (USB drive bays that have cloning ability) based. This article is about getting it to boot on another piece of hardware (or in a Virtual Machine). And yes, there are many automated ways of doing it with Acronis Universal Restore, etc. This article is for when the 'automatic stuff' doesn't work.

If your interested in reading about the boot process of a PC and how Windows boots (NTLDR / MBR and UEFI Style), Wikipedia has a ton of good stuff on it.

First Things First (and where they are)

To fix a Partition's 'boot information' (not just the BCD File): bcdboot c:\Windows /l en-us /s c: /f ALL /v (choose the language of your choice, just to make sure the bcdboot command gets it right.)

Fast Boot (not to be confused with Ready Boost) and HiberFile

Control Panel, Power, Choose what the power buttons do*, Turn on fast startup (To modify the settings, see the Change Settings that are currently unavailable towards the top)

The simplest thing to do is to let it crash and reboot a couple of times until it offers to boot into Safe Mode (which it should successfully do). Safe Mode now seems to include the ability to try various RAID / HDD / SSD / NGFF / NVMe / etc. drivers (or maybe it just loads all the drivers by default. Anyway, after booting into Safe Mode,

EasyBCD has some minor issues. The first that comes to mind is that it doesn't always decide on the correct BCD file if there are multiple partitions with BCD files. It gets it right about 98% of the time, but sometimes decides on the wrong one. So just to be sure, and to avoid frustration, double check by loading the BCD you want to edit.

Another issue it has relates to the "Metro" Boot Menu (see below). The checkbox for the menu just doesn't seem to ever match up with reality. Use BootICE or the Command line to control the "Metro" feature.

Instead of the clunky Text based boot menu, you can have a cool Windows 8 "tile looking" boot menu. The down side is that it comes up later in the boot process than the text menu. So if there's an issue with any partitions on a disk drive, you might never make it to that menu to select an option before the computer crashes. Play it safe and keep the text based menu.

Other Stop You in Your Track Issues and their Solutions

There are many, many reasons Windows will find not to boot. Here are just a couple of odd solutions;

If you've got a BOOT and EFI Folder / Directory on a Partition, watch out for a common hole to fall into for systems that boot MBR and UEFI. Remember, both the BOOT (for MBR) and EFI (for UEFI booting) have BCD files. If you're trying to boot via MBR and haven't modified the EFI BCD File, a system might fool you into a frustrating situation if it's booting from the EFI BCD file instead of the BOOT (MBR) BCD file. Manually select the boot device (F12 key on many systems), just to make sure.

If Windows won't boot, use a boot CD to re-build / re-create the BSD information (MBR or U'EFI). The Windows installation DVD / ISO can be used. OR, one of several WinPE boot CDs out there (descendants of BartPE) like Hirem's Boot CD with a visual BCD Utility like EasyBSD or BootIce.

...and the number one item returned from a search by Google on the terms: "Windows" "Ready Boost" (or "ReadyBoost") is this retarded feature that actually promotes the idea of using Read Boost on a USB 2.0 device in the year 2022: https://www.thewindowsclub.com/how-to-turn-readyboost-on-or-off-in-windows-7 WTF?!?!?

Thankfully in an odd twist of fate where Microsoft actually gets something right in preventing users from enabling something they shouldn't is this; 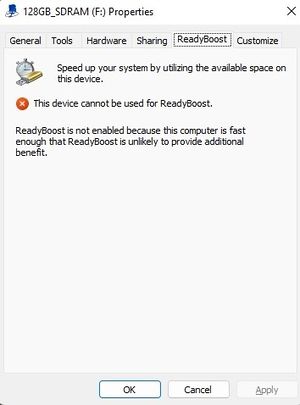 Again, Microsoft got something right. Wow!

So back to Google bashing... This is an example of why computers aren't smart enough to know the best answer. In the year 2022, the best formatted website (AKA conforming to Google's 'Best Practices') gets the number one listing, not the website containing the best information. It's that way with so many sites these days that poach content off of other sites, do a great job conforming to Google's 'Best Practices' in terms of SEO, and get listed first.

Rough Notes (all the below can be ignored, it's just the rough notes this article was based on

Be prepared to fix BCD stuff (the BOOTREC command is next to useless. Imagine spinning around in a circle seven times, and then pinning the tail on the donkey, that's about the success chances of BOOTREC, IE nothing evil or bad, just sheer luck that it will work or not, which begs the question of how useful a feature it is.) with: BCDBOOT: https://www.partitionwizard.com/partitionmagic/the-requested-system-device-cannot-be-found.html (Documentation from Microsoft: https://docs.microsoft.com/en-us/windows-hardware/manufacture/desktop/bcdboot-command-line-options-techref-di?view=windows-11)

RAID VS AHCI: In Windows 11, there's a shortcut to switching between RAID and AHCI: https://support.thinkcritical.com/kb/articles/switch-windows-10-from-raid-ide-to-ahci (The registry can still be used too, but this seems easier, except if one wants to switch back to IDE / ATA: https://wrw.is/switching-from-ahci-mode-back-to-ide/, and to a lesser degree: https://www.partitionwizard.com/partitionmagic/enable-ahci-after-win-10-installation.html)

(https://support.bromium.com/s/article/Disabling-Windows-10-Fast-Startup (and don't forget to mount the proper SYSTEM Hive, the System Hive from the Bootable Media or Rescue Media is different)

...turn off Ready Boost or Boot or whatever

NOTE: The BCD boot menu comes AFTER disk WhatEver.sys file, so if the correct drivers aren't there, will never see the menu

Another NOTE: One of the solutions from switching to ATA (IDE for SATA), is to switch the BIOS to AHCI (from ATA), then let it reboot and crash a couple of times until it finally offers the Safe Mode option (F8), then boot to Safe Mode, Reboot, then it will be in AHCI mode. OR use the boot CD / DVD / ISO to modify the Start Up Settings (in the BSD)

RAID or AHCI to IDE seems to be all good to go (or a Safe Boot, then Restart)

And IDE to ACHI

AHCI: iaStorV is set to 1

RAID: iaStorV is set to 1

iaStor (plain) and msahci do NOT seem to exist anymore for Windows 11 (but storeahci does), perhaps in favor of the MS Storage Space 'thing' / 'multi-driver thing' (present in RAID, AHCI, and ATA / IDE).

intelide and pciide always set to 0 for RAID, IDE / ATA and AHCI modes

In the end, switching between modes can be as simple as boot / safe mode / boot, without worrying about manually changing registry entries.